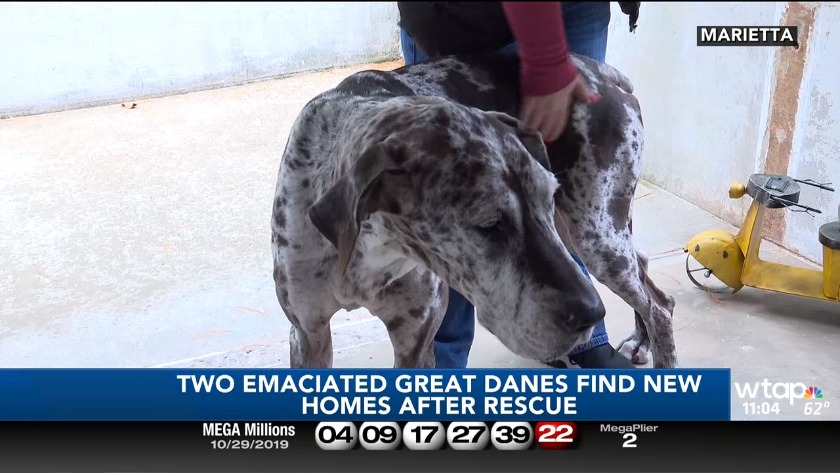 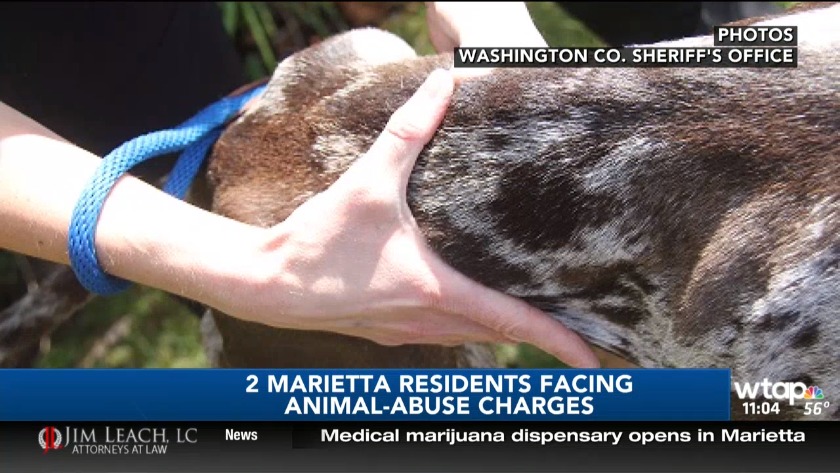 Tuesday WTAP brought you a story about two severely malnourished Great Danes rescued by the Washington County Sheriff’s Department and Wednesday WTAP checked in on the dogs.

Deputy Sgt. McGilton says the dogs were in some of the worst conditions she’d ever seen, but there’s a diamond in the rough.

And Zeus, the male rescue is also doing well. He’s up to 103 pounds.

The dogs were rescued after Marietta police requested back up from the sheriff’s department.

What she found inside was heart wrenching. Four dogs total. Two were in far better conditions than Diamond and Zeus, who McGilton believes were trapped in cages up to 24 hours at a time.

“You take a breath in and it burns from the smell of the ammonia from the feces and urine and I viewed the dogs, it looked like skin hanging on bones,” said McGilton.

The homeowner and her adult son are charged with two felony counts of cruelty to a companion animal.

The Great Dane’s however, have been set free and into the arms of new loving families. Diamond was officially adopted by her foster family on Wednesday and Zeus is expected to be adopted by his foster family once he finishes putting weight on his enormous frame.

Two Marietta residents face felony animal-cruelty charges after authorities said two dogs in their care were found to be in extremely poor health.

Miranda J. Duty, 40, and Christian D. Kendall, 21, will be required to appear in Marietta Municipal Court to face two counts each of cruelty to a companion animal, the Washington County Sheriff’s Office said in a news release on Tuesday.

Authorities said they removed two severely emaciated and dehydrated Great Danes from their home on Sharon Street in Marietta, which had animal feces and urine throughout the upstairs.

“Sgt (Kelly) McGilton examined the two dogs, and when picking up the skin on their backs, found the skin to peek,” the news release said. It “stayed peeked and the fold of skin fell over and did not revert back to normal.”

Deputies said a local veterinarian examined both dogs and confirmed their deteriorating health was a result of not getting enough food and water. They are currently in foster care and their health is improving.

According to the release, Duty told deputies that she was switching the dogs’ food and had been trying “everything she could.” She also said the dogs had never been to a veterinarian.

Duty also told deputies that Kendall was responsible for feeding the dogs, but both Duty and Kendall acknowledged that he sometimes fed them only once a day.