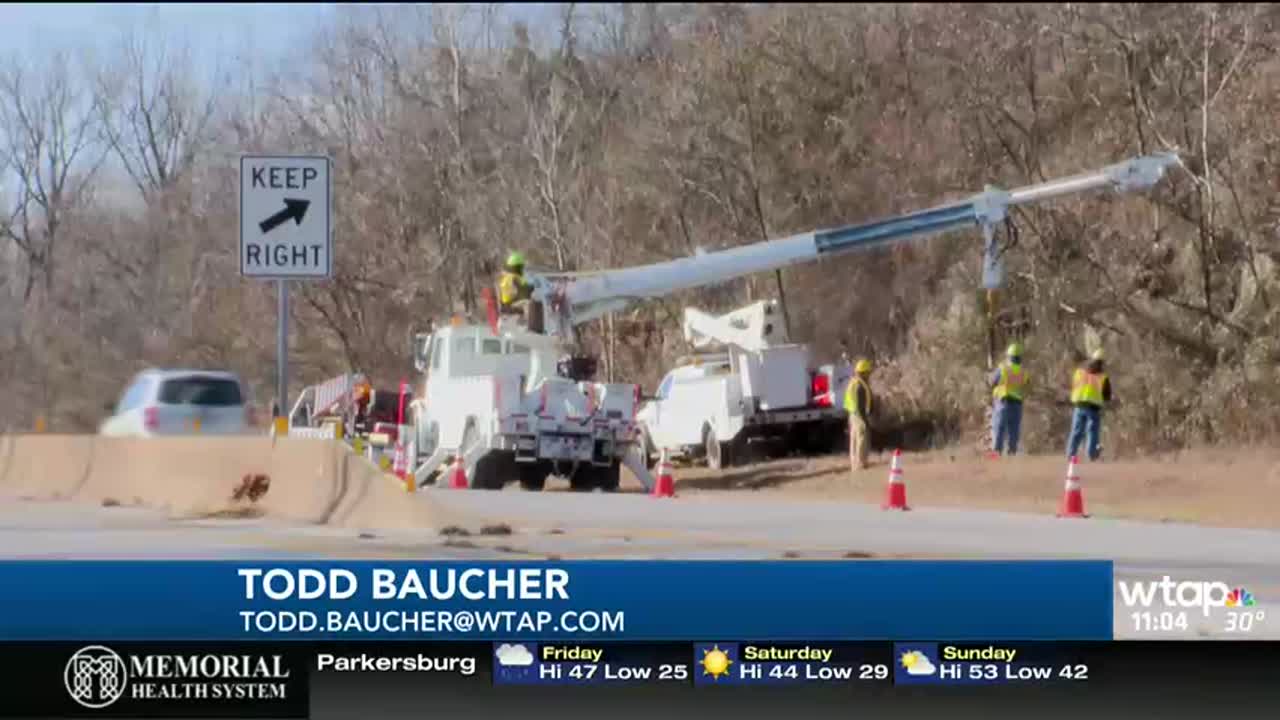 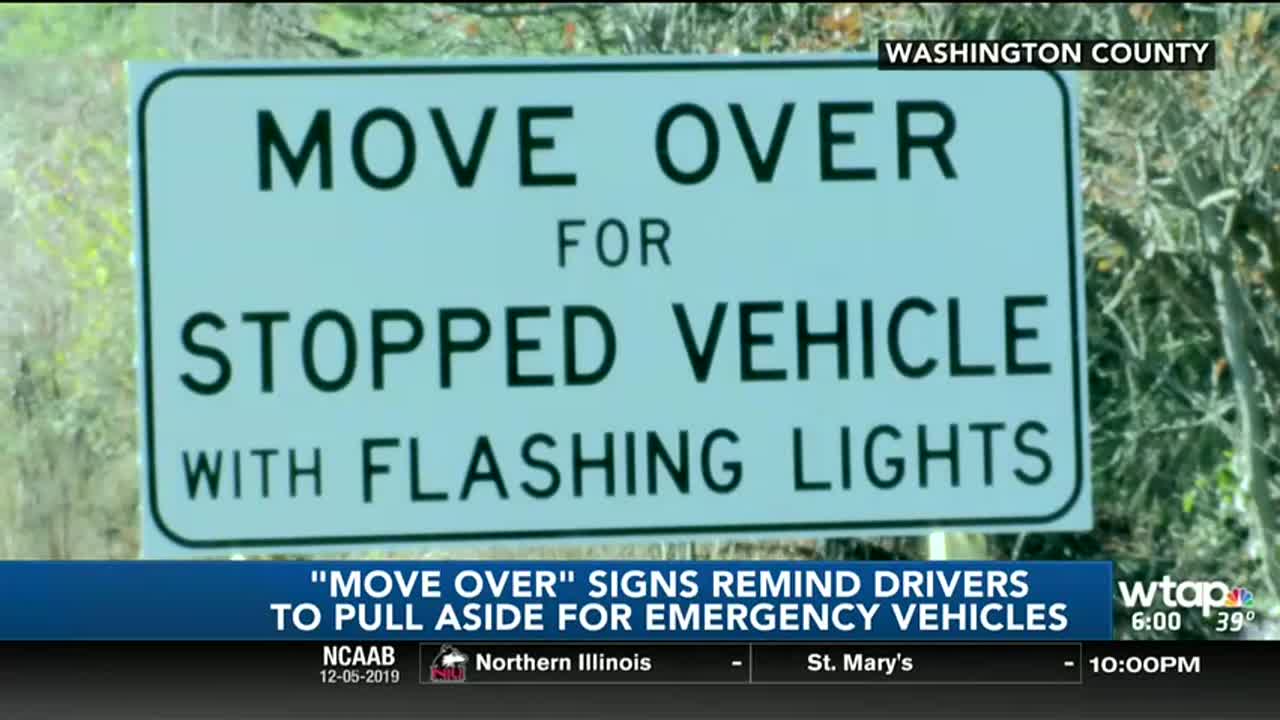 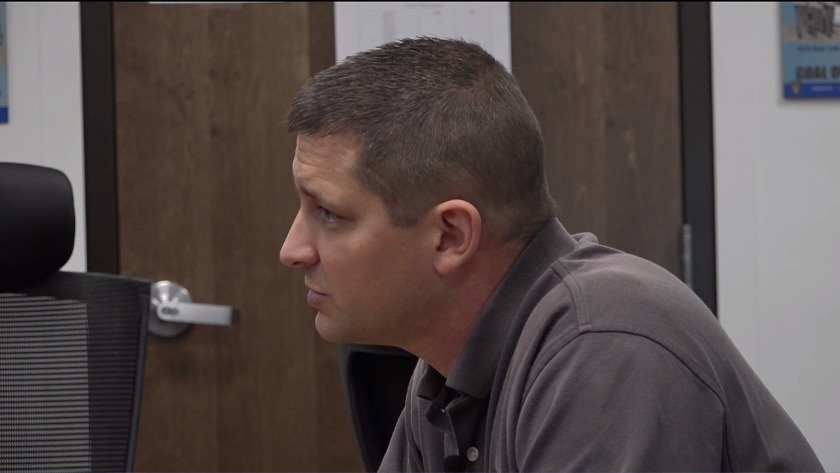 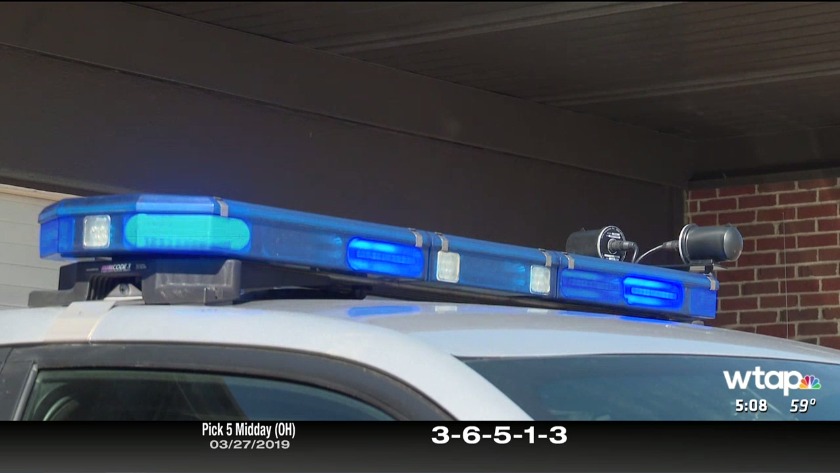 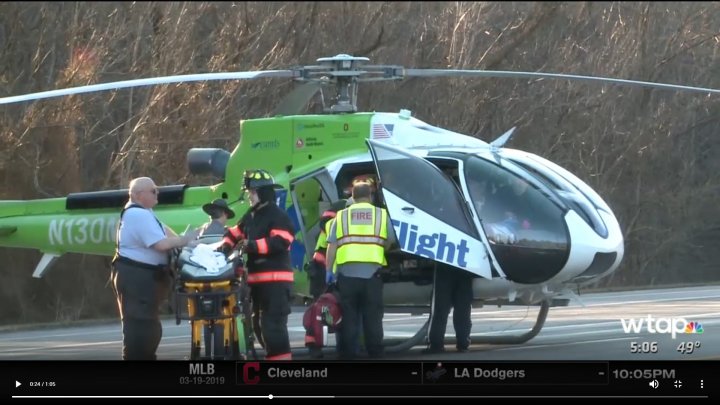 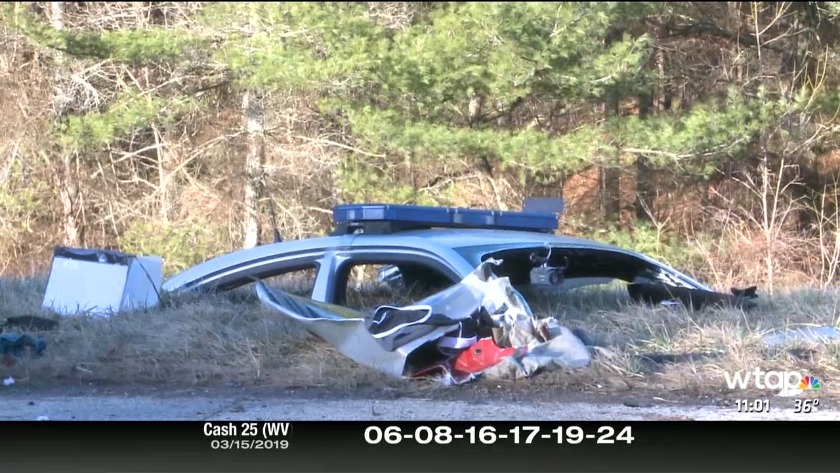 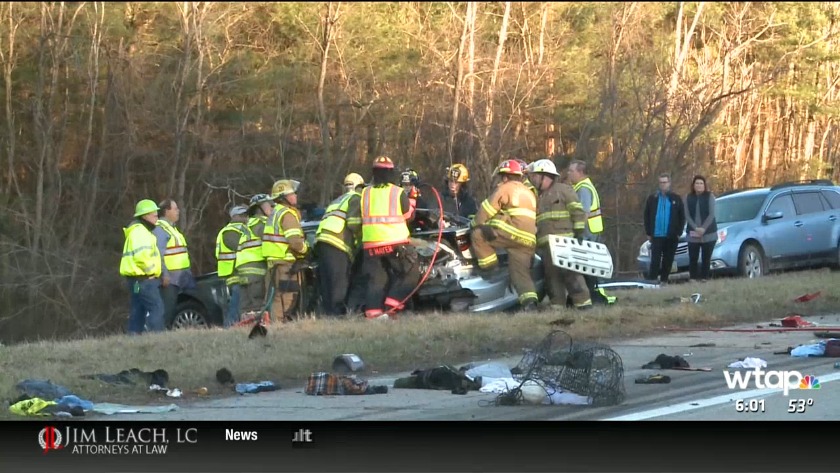 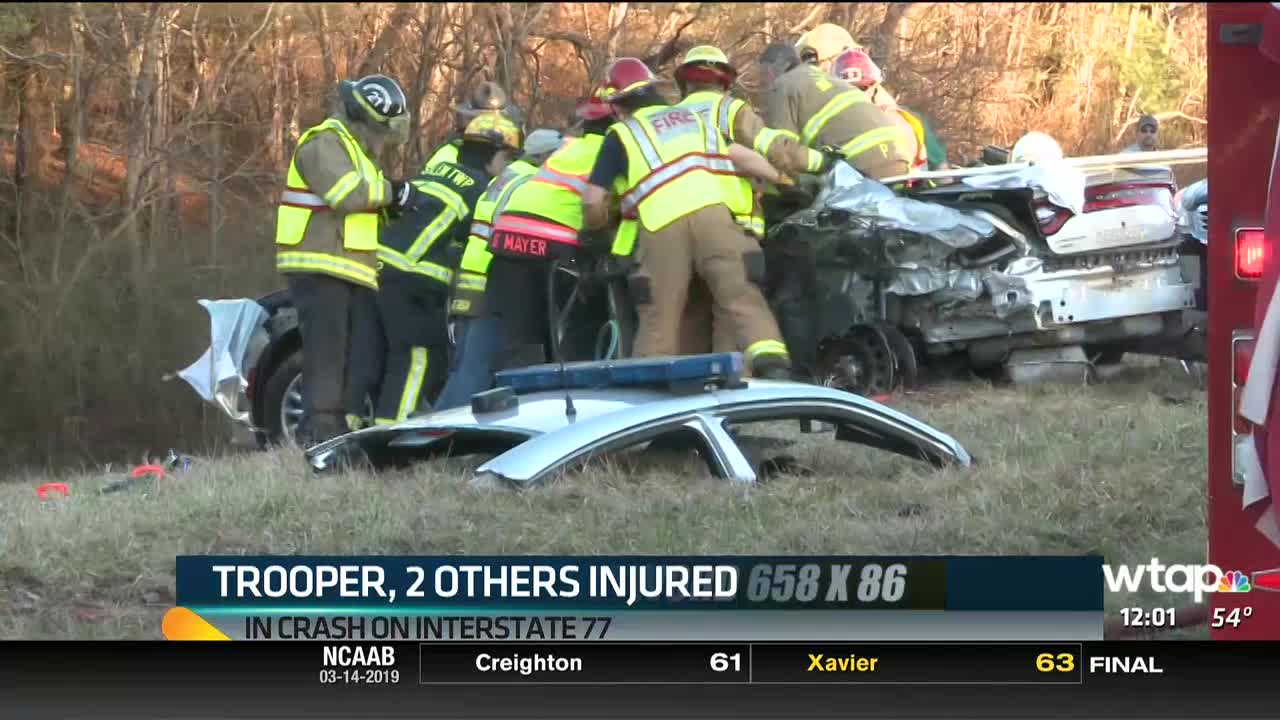 Sgt. Eric Knowlton was back at work later in the month, after being struck by a semi-truck while he had a motorist pulled over in Interstate 77.
.
"A lot of people think the main threat we would have is the violator we have to stop," Sgt. Knowlton said in an interview with WTAP two weeks after the accident. "That is something that can happen. But a lot of times, it's the traffic we have to worry about."

It can be a hazardous situation for anyone pulled over on the highway. But state law says motorists must move over into another lane, or if that isn't possible, slow down for state vehicles with flashing lights stopped on the roadside.

"In 2018, there were four fatalities in Ohio work zones. 10 were motorists, four were highway workers," says Ashley Rittenhouse, Spokeswoman, Ohio Department of Transportation. "Unfortunately, it's happening too frequently, people aren't paying attention and following the law."

ODOT Thursday installed signs-in addition to what are already installed on major roadways, reminding drivers of the law.

A reminder for motorists-distracted or not.

Ohio State Highway Patrol Sergeant Eric Knowlton, who was struck on Interstate 77 while conducting a traffic stop, earlier this month, spoke exclusively to WTAP Wednesday for the first time since the accident.

The Marietta post officer spoke how he’s doing, taking it easy to recover from some broken bones in both of his legs, and his renewed focus on the state’s Move Over law.

"It was completely out of nowhere," he said. "I didn't see it coming at all. I had no idea what hit me until someone actually told me."

Sgt. Knowlton says he was alert and conscious throughout the entire ordeal as emergency crews had to use mechanized means to extract him from the car. He and others were struck by a semi truck on interstate 77.

He added the the doctors noted that they "definitely said I was lucky" and that they didn't diagnose the broken bones until they completed several different scans.

"The entire door on the drivers side was crushed into me," he said. "I think that’s kind of what held me in plus we have a lot of equipment that’s in there, the center console is built up and the computer system that we have in there and everything and it was just difficult for me to get out."

Knowlton stressed he's humbled by the response he's received from the local community as well as across the state.

"Just a big thank you to each department that showed up," he added, "and each officer and each fireman, EMT, everybody that showed up. I mean I appreciate everything they did."

Knowlton added that the Move Over law now has more personal meaning to him. He says more education, as well as more practical means like added and visible signage along roads and highways, can go a long way toward fighting this problem.

"There are signs up everywhere but I don’t know the extent if they need more or not but it wouldn’t hurt," he said.

"That’s one main goal that we have at the patrol to educate the motorists and to change their driving behavior."

Sergeant Eric Knowlton of the Marietta post of the Ohio State Highway Patrol was released from Grant Medical Center in Columbus on Saturday.

Sgt. Knowlton was injured when a tractor-trailer hit his cruiser and a truck he had pulled over on Interstate 77 on Friday.

“He received some stitches," Lt. Chris Chesar, the Marietta post commander said. "He has some bruising and some bumps, and he’s really stoved up right now, kind of sore, so he’s just recovering right now…No broken bones, so we’re thankful for that.

"He’s a very lucky person. We’d like to thank everybody that was on scene and people that have been calling in with their words of support for him.”

Chesar also said Tuesday that the crash investigation is still ongoing, so he does not have an update on potential citations or charges.

Kaycie Hanson and Matthew Henry of North Carolina, and David Midcap of Ohio, have all been released from Marietta Memorial Hospital after an accident Friday morning involving a semi truck and an Ohio State Highway Patrol cruiser.

The collision happened on a traffic stop when Sergeant Eric Knowlton was issuing a citation to the driver who was in the back seat of Sergeant Knowlton’s car.

That’s when a commercial vehicle went off the right side of the roadway, struck Sergeant Knowlton’s vehicle, and then struck the white pickup truck that was pulled over.

Sergeant Knowlton of the Marietta post of the Highway Patrol was flown by helicopter to Grant Medical Center in Columbus.

We do not yet have an update on his condition.

Four people are injured after a three-vehicle accident on I-77 Friday morning.

Around 7:45, Sergeant Eric Knowlton from the Marietta Post of the Ohio State Highway Patrol stopped a southbound 2005 GMC Sieerra with driver Kaycie Hanson and passenger Matthew Henry, both from North Carolina, on a routine traffic stop.

“He was issuing a citation to the driver who was in the back seat of Sergeant Knowlton’s car when a commercial vehicle went off the right side of the roadway, struck Sergeant Knowlton’s vehicle, then struck the white pickup truck that was stopped,” says Lt. Chris Chesar, commander of the Patrol’s Marietta Post.

The semi, driven by David Midcap of Ohio, then is believed to have traveled through the median and across the northbound lanes of 77.

Sergeant Knowlton was trapped in the cruiser and extracted through mechanical measures.

He was then transported by helicopter to Grant Medical Center in Columbus, and was alert and talking to authorities before leaving for the hospital.

Hanson, Henry, and Midcap all sustained injuries and were transported to Marietta Memorial Hospital.

Interstate 77 was closed in both directions between State Routes 7 and 821 until just after 1 P.M. Friday afternoon.

Currently, there are no charges at this time.

The crash remains under investigation.

An Ohio State Highway Patrol trooper from Marietta injured when his cruiser was hit by a semi during a traffic stop Friday morning was alert and talking to authorities before he was flown to a Columbus hospital, authorities said.

Lt. Chris Chesar, commander of the patrol's Marietta post, said the injured trooper is Sgt. Eric Knowlton. He was flown to Grant Medical Center in Columbus after the crash.

At least two other people were injured in the crash and taken to Marietta Memorial Hospital. Authorities have not released their names.

The three-vehicle crash happened about 7:45 a.m. at mile-marker 3 in Washington County and shut down the highway between State Routes 7 and 821.

A Highway Patrol dispatcher said a semi hit the trooper's cruiser and that a pickup truck that had been pulled over by the trooper was also struck.

A trooper from the Marietta Post of the Ohio State Highway Patrol is being flown to a Columbus hospital after being injured in a three-vehicle accident on Interstate 77 in Washington County Friday morning.

An OSHP dispatcher said the trooper, who is being taken to Grant Medical Center, was injured when his cruiser was hit by a flatbed tractor-trailer while he was stopped along the highway conducting a traffic stop.

Two other people in a pickup truck the trooper had pulled over were injured and transported to Marietta Memorial Hospital, the dispatcher said.

The crash happened about 7:45 a.m. near mile-marker 3, and the highway is shut down in both directions between State Routes 7 and 821.

It's unclear when it will be re-opened.

Interstate 77 in Washington County is closed in both directions because of an accident involving a semi.

According to the Ohio Department of Transportation, the highway is closed between State Routes 7 and 821.

It's unknown how long the highway will be closed.

We have a reporter at the scene, and we'll have updates online and during our regularly scheduled newscasts as more information becomes available.