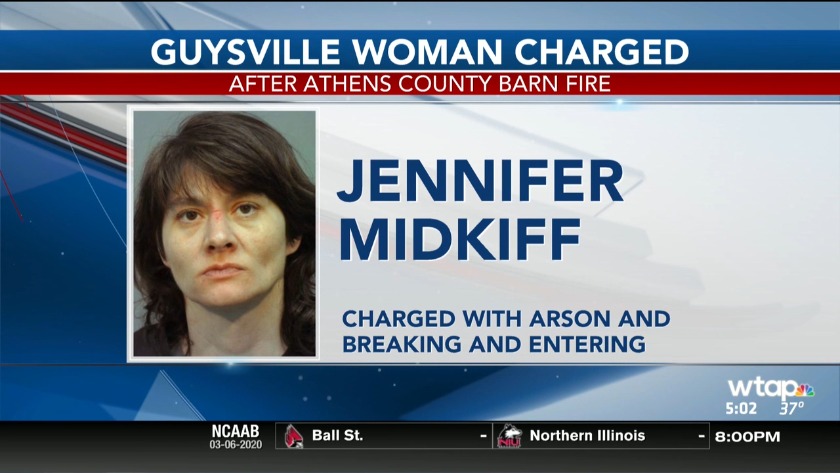 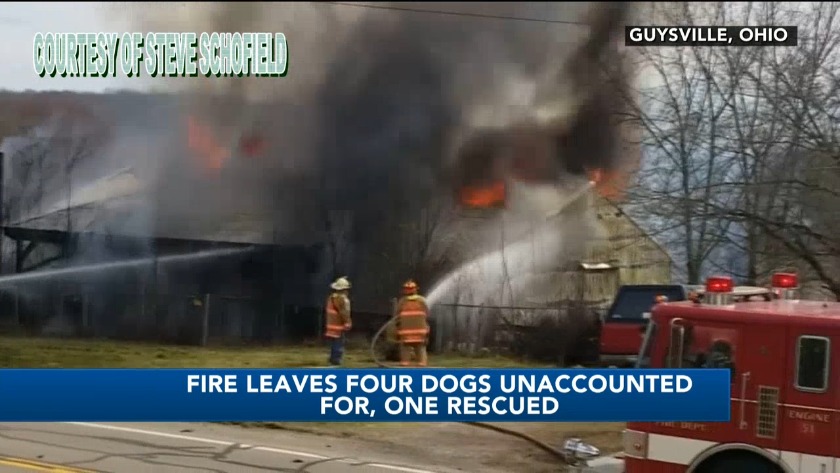 A woman has been charged with arson in connection with a fire that destroyed a barn in Athens County on Thursday.

Jennifer Midkiff, 39, of Guysville, was also charged with breaking and entering in the fire that left four dogs unaccounted for. She is being held in the Southeastern Ohio Regional Jail on a $10,000 bond pending an appearance in Athens Municipal Court on Monday.

Authorities said the fire broke out about 1 p.m. Thursday at the barn located on Franklin Street in Guysville..

Martha Carson, the owner of the barn, said she had intended to turn the building into a dog-rescue facility.

First responders were able to save one of the five dogs in the barn.

Five dogs were reportedly inside when the structure on Franklin Street in Guysville caught fire about 1 p.m. An Athens County Sheriff's Deputy was able to rescue one of the dogs, first responders said.

Authorities closed a section of State Route 329 while emergency crews worked to extinguish the blaze, but it has been reopened.

Mike Hart, chief of the Rome Township Volunteer Fire Department, said firefighters began knocking down the flames within minutes of arriving at the scene. They remained on the scene for several hours cleaning up.

The barn's owner, Martha Carson, lives next door. She said she is devastated.

"Well, this is my worst nightmare," she said. "I always made sure things were unplugged, and that there wasn't anything, you know, no heater left on or anything so a fire could start while I was gone."

Carson said neighbors are suspicious that someone may have started the fire.

No criminal charges have been filed, but Athens County Sheriff Rodney Smith confirmed his department is investigating the fire as a possible arson. He said deputies have interviewed someone in connection with the fire.

A section of State Route 329 in Athens County is currently closed while emergency crews respond to a structure fire on Franklin Street in Guysville.

The road is closed between Route 50 and New England Road, according to the Ohio Department of Transportation District 10 office in Marietta.

We have a reporter headed to the scene and will have updates online and during WTAP News @ 5 and 6.