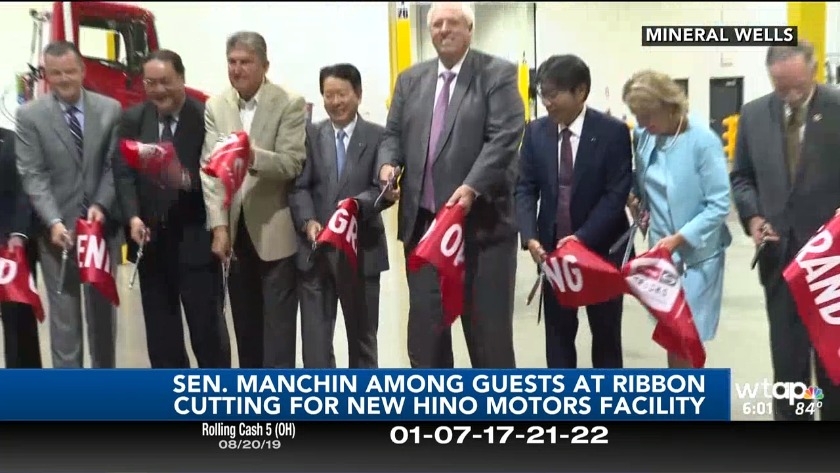 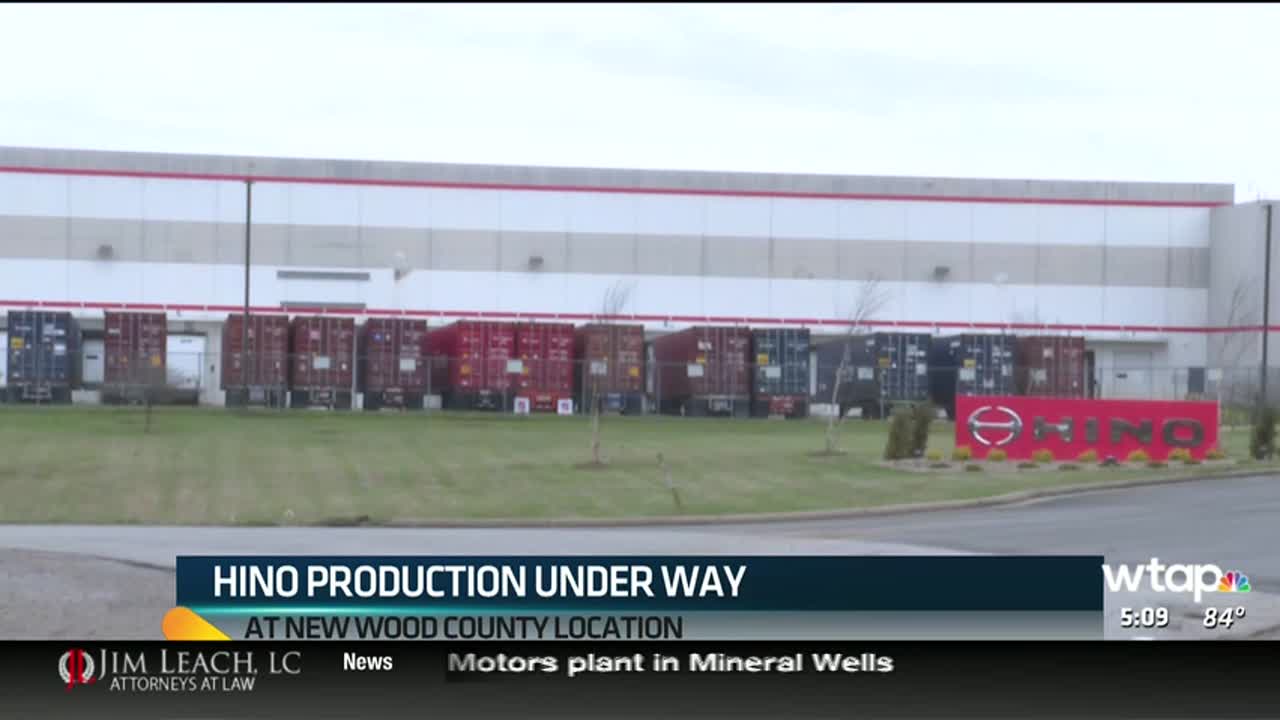 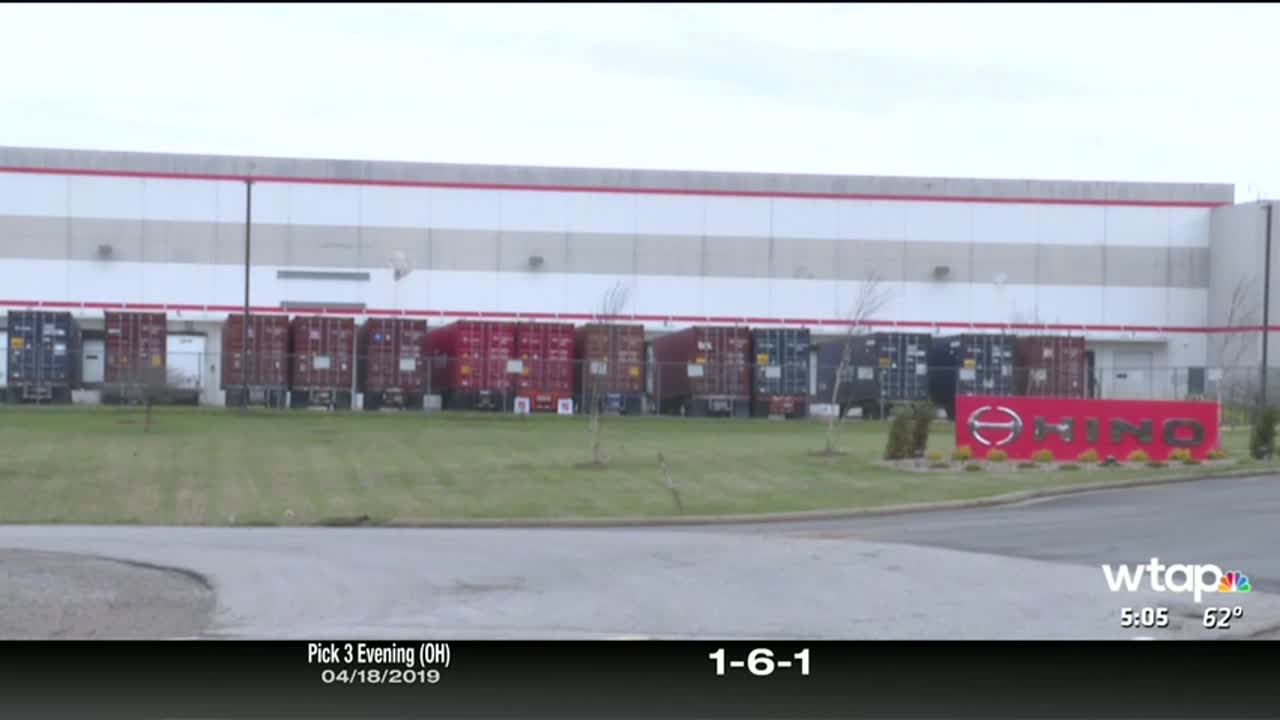 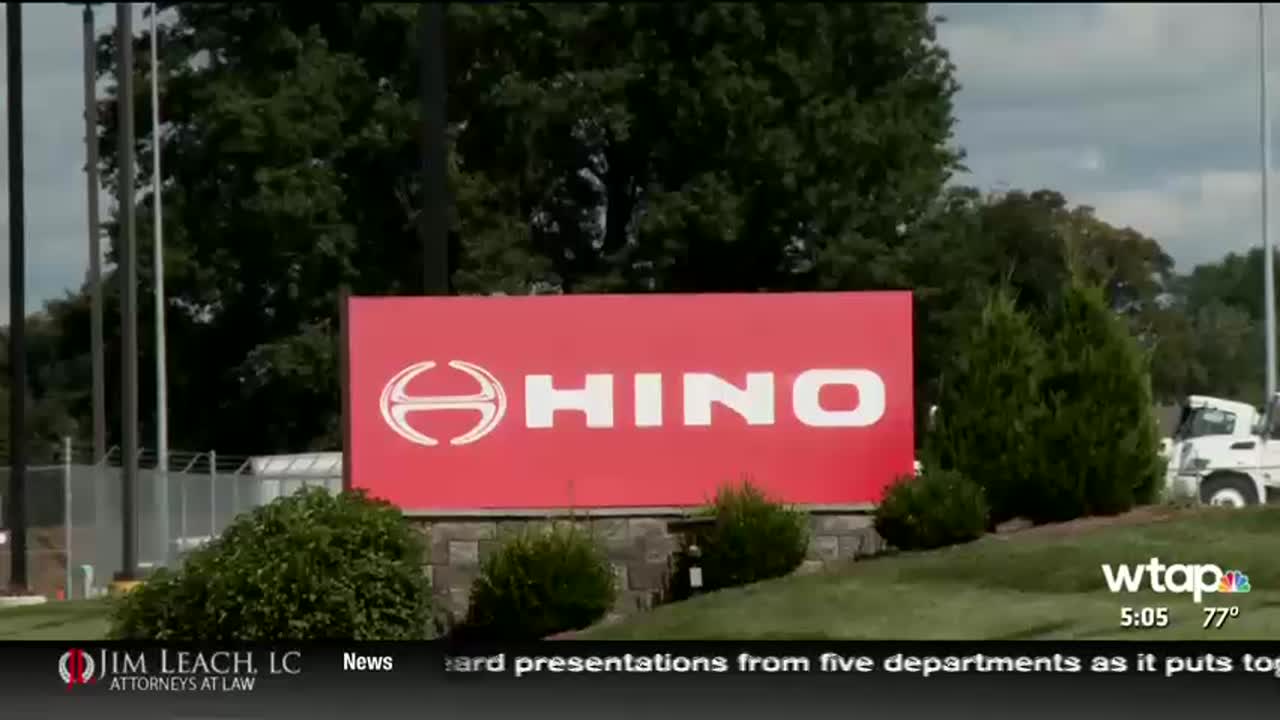 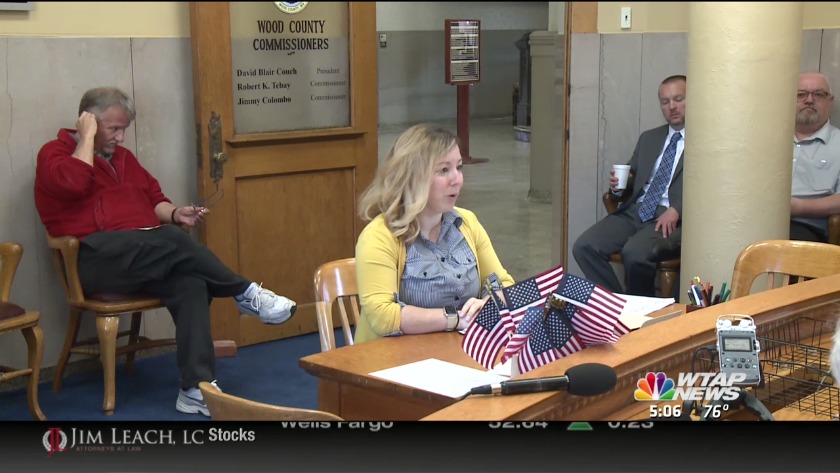 "We have been working with some businesses over the course of the last year," says Lindsey Piersol, Director, Wood County Development Authority, "probably the last year and a half, trying to figure where to locate them, and whether this would be a good fit for them, and we continue to have those discussions."

"When you have something of this magnitude, there's an awful lot of suppliers who have to benefit," noted U.S. Sen, Joe Manchin, "and basically working with them to make them successful."

The Wood County Economic Development Authority posted the announcement on its Facebook page Wednesday afternoon as federal, state and local leaders joined Hino officials at the plant for an official open house.

Hino said the new jobs would be created over the next three years, bringing total employment at the Mineral Wells plant to 800 by 2022.

Hino, which began operations at a new plant on Route 14 in Williamstown in 2007, moved into the former Coldwater Creek facility in May.

In June 2016, the company hit a milestone with the production of 50,000 trucks at the plant. Then, last March before the move to Mineral Wells, the company set a record by producing 63 trucks in a single shift that included overtime.

We'll have more updates on Wednesday's developments online and during our evening newscasts.

From full production in Williamstown, to operating 20 miles away near Mineral Wells: the shift of Hino Trucks took place in less than three weeks.

But more importantly, the move not only involved a transfer of truck construction, but the warehousing of parts for those vehicles.

"This consolidation allows us to have all those parts on hand, which really improves the efficiency of our operation," Plant Manager Steve Stalnaker said in a sit-down interview Friday with WTAP, "and the management of it. Additionally, this new line allows us to produce 20% more trucks in a single shift than we had the capability to do in Williamstown."

And that's considering that in March, Hino set a record by producing 63 trucks in one shift-plus overtime-in Williamstown.

And the new operation allows Hino to expand its workforce to its current 460 workers.

"When I joined Hino 8 1/2 years ago, we had 180 team members," Stalnaker recalls.. "So we've had signifcant growth during that period, and have been able to identify good local quality talent."

And the former Williamstown location is now occupied by Marietta-based Wetz warehousing, which Stalnaker says is also serving the new Hino site.

"They provide some parts management for us, and they have moved into that facility, and are currently operating there."

If production continues to increase, Hino hopes to add a second shift at its new home.

Production of new trucks at the relocated Hino Motors plant near Mineral Wells officially got under way this week.

Plant manager Steve Stalnaker says work will begin slowly, before eventually reaching full production capacity by the end of May.

The transfer of operations from Hino Motors Williamstown site of 12 years to Mineral Wells began a week ago, and Plant Manager Steve Stalnaker says the move is going smoothly.

Stalnaker says, in the short term, staffing should be enough to begin production there April 29.

He says in spite of a competitive job market, Hino has been able to meet its employment needs.

A Marietta company, Wetz Warehousing, will occupy the Williamstown plant site once the move is completed.

Hino expects to increase production 20% at the new facility.

When Hino Motors begins operations at its new plant just outside Parkersburg, there's likely to be some traffic congestion.

The Wood County Commission Monday gave approval to the county development authority to seek a grant for the installation of a traffic signal at route 14 and Hino road, near the plant site.

A traffic study indicated there's a need for a signal at that intersection-especially at the beginning and end of the day shift.

Steve Stalnaker, manager of the local Hino Motors plant, tells WTAP operations will shift from Williamstown to the former Coldwater Creek complex beginning with the end of the day April 12.

According to Wood County Commissioner Bob Tebay, Stalnaker made that announcement at Wednesday's meeting of the Wood County Development Authority.

Hino announced in September, 2017 it had acquired the former Coldwater site for production of a new truck line.

He says transfer of operations from Williamstown to Parkersburg will take about two weeks to finalize.

During 2018, Hino actively held searches for workers at the new facility, which included hiring events at the Parkersburg Manpower office.

Stalnaker said, for now, employment at the new facility will remain the same as in Williamstown.

It is a period of transition for Hino Motors, particularly with its new facility on the outskirts of Parkersburg nearing completion.

"We are transferring operations from our Ohio logistics center outside of Columbus," Steve Stalnaker, Senior Vice-President and Plant Manager told the Parkersburg Rotary Club Monday, "which warehouses parts and ships parts to our manufacturing facilities."

The former Coldwater Creek distribution warehouse has undergone a lot of modifications, all in preparation for Hino to manufacture a new truck line, once it begins operation in 2019.

"The new XL Series truck, which is a larger truck, we will begin production of it in January, 2019," Stalnaker says. "We will also be moving its operations at the end of the year into the new facility."

Still up in the air: the future of Hino's 11-year old Williamstown plant. Stalnaker says no decision has been made, but hints at a consolidation of manufacturing lines as early as next summer.

"At that time, we will begin to study what the disposition will be on the Williamstown plant."

He adds employment at Hino's local facilities has more than doubled during the past seven years. During the first half of 2019, more than 70 trucks will be produced at the two plants.

There are efforts to locate other, smaller businesses near the new Hino plant, due to open in 2019 at the former Coldwater Creek plant off West Virginia route 14

Lindsey Pierson, Director of the Wood County Economic Development Corporation, told the county commission Monday efforts are underway to locate smaller companies in that area, companies who would supply Hino with materials.

"I was hoping I could announce something today," Piersol said, "but it is a little behind schedule. I will say, on some of the land out there, you'll see buildings go up shortly, that's close to the plant. With that being said, we're working with another supplier right now to put them on land out that way.

Meanwhile, Piersol says a plastics recycling firm plans to locate off route 14, a few hundred feet from the Hino site.

Sterling Packaging, a plastics recycling firm, would be located near Conley Fabrication.

It's not due to be up and running for another year, but Hino Motors is well on its way to locating a new truck manufacturing plant in Wood County.

Pierson says Hino has virtually cleared out the former Coldwater Creek plant on the outskirts of Parkersburg, and two related manufacturing firms already have pledged to locate in Mineral Wells.

The Hino truck facility is due to begin production in 2019.

"On March 7, Hino is going to an auto show where they're going to unveil the truck," Piersol told the commission. "We're going to try to go to (that show), and see if there's vendors and suppliers we can talk to, to see if they have any interest in coming to the park."

Piersol adds her office also is aiding in the development of the former U.S. courthouse and the Dils Building-both of which were sold to new owners in 2017.

And two companies are interested in locating to Wood County. Piersol did not name the firms or what sites they're looking at.