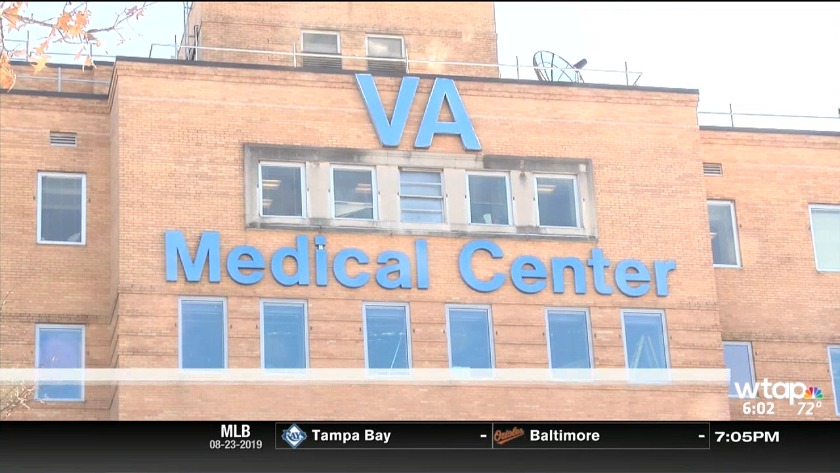 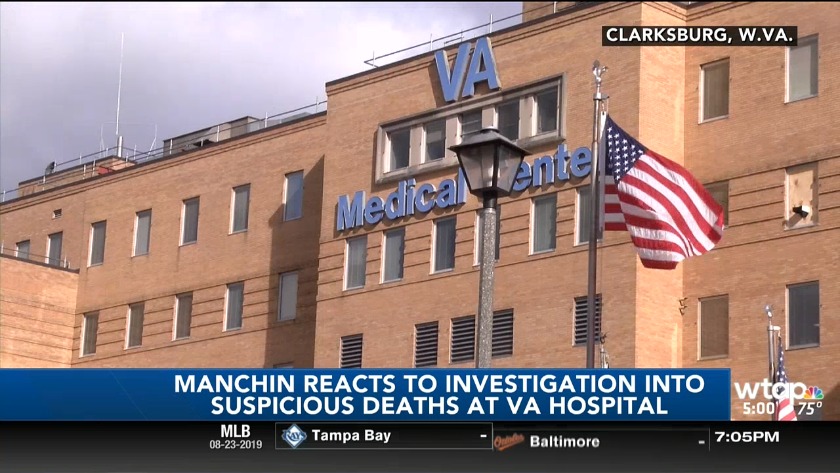 A third lawsuit has been filed involving the deaths of patients over wrongful insulin injections at a West Virginia veterans hospital. Charleston attorney Tony O'Dell filed the federal lawsuit Monday in the death of John William Hallman. The 87-year-old Navy veteran died at the Louis A. Johnson VA Medical Center in Clarksburg in 2018. The lawsuit was filed on behalf of Hallman's son and daughter. It seeks unspecified damages. Two other lawsuits have been filed on behalf of the families of other patients who died at the hospital in 2018.

Another victim has been identified in the Louis A. Johnson VA Medical Center deaths. This is the seventh victim identified.

Attorney Tony O'Dell says the victim, an 89-year-old Army veteran, was admitted into ICU at the Clarksburg VA Jan. 2018. The victim, who has not been named, was moved from ICU to floor 3A when his condition improved.

During the overnight hours on the night before the victim died, an unexplained hypoglycemic event happened, O'Dell said. His blood sugar dropped to 27.

The victim was not a diabetic, according to O'Dell.

The victim was administered dextrose but they couldn't stabilize him. He died 24 hours later. The cause of death was ruled a hemorrhagic stroke.

O'Dell says an autopsy was performed 19 months after the victim's death. A medical examiner from Dover Air Force Base, who performed the autopsy, changed the cause of death to undetermined.

There was no medical explanation or cause for the severe blood sugar drop, O'Dell said.

According to a medical examiner at Dover Air Force Base, the cause of death fit the pattern with the rest of the recent VA deaths ruled as homicides.

According to O'Dell, one of the victims, John Hallman's cause of death was changed from food or vomit in the lungs to unexplained hypoglycemia. His body was cremated before an autopsy could be performed.

U.S. Attorney Bill Powell ruled both the victim and Hallman's deaths as a homicide.

At least ten suspicious deaths have been reported at the Clarksburg VA Medical Center.

An attorney has confirmed a third homicide at the Louis A. Johnson VA Medical Center, according to a report by WDTV Television.

Attorney Tony O'Dell said he was told by a lawyer in Clarksburg that the death of his client who died at the hospital on Sept. 17, 2018, was ruled a homicide. The lawyer requested to remain anonymous.

A VA oversight committee hearing was scheduled to discuss the Clarksburg VA deaths on Wednesay.

Last week, the Washington Post reported that federal authorities had identified a now-fired hospital employee as a person of interest in their investigation of up to 11 suspicious patient deaths at the VA center.

The report said the woman worked the overnight shift as a nursing assistant and left last year. She was assigned to monitor several of the veterans who died in what are known as one-on-one bedside vigils for patients who need extra attention, the newspaper reported.

The newspaper has not identified the woman because she has not been charged.

The family of a fourth patient is seeking answers as authorities investigate multiple suspicious deaths at a Veterans Affairs hospital in West Virginia.

Federal prosecutors are probing up to 11 patient deaths at the facility.

Colombo said federal investigators exhumed Edgell's body last year. He shared a portion of an autopsy that links the death to the unprescribed injection of insulin.

We now know the identity of another man whose death at the Louis A. Johnson VA Medical Center was deemed suspicious.

The lawyer representing the family of Archie Edgell is confident the Army veteran's death was among around 10 deemed suspicious at the Clarksburg facility in 2018. Two have publically been confirmed as homicides.

Archie Edgell died at age 85 when he was a patient at the Clarksburg facility in March 2018. He served as the street and water commissioner in Salem for 20 years. He had dementia but wasn't close to death, lawyer Dino Colombo said, who is representing the family.

Four days after he was admitted to the hospital, he was dead.

Nine months after his funeral, representatives from the VA Office of Inspector General showed up to Edgell's son's home in Doddridge County.

Edgell's body was exhumed and an autopsy was performed, finding four insulin injections on his legs and arms.

The autopsy ruled his death was suspicious, but investigators have not drawn the conclusion yet that it was a homicide. Colombo said investigators are still examining forensic evidence, but has no doubt the deaths followed a similar pattern to others previously reported.

The families' lawyers all said they know of at least 10 victims. Colombo said all of them died under the same suspicious circumstances on floor 3A of the facility during the same time period.

Colombo said the lawyers also have an idea of who the person of interest is, but deferred to the U.S. Attorney's office to release more details. U.S. Attorney Bill Powell contacted Colombo Thursday morning to let him know Edgell's death was on their radar as one of the victims.

According to USA TODAY, a second homicide has been identified out of 11 suspicious deaths at the Louis A. Johnson VA Medical Center.

Last month, investigators found that Shaw was killed and did not die of natural causes.

Shaw's death is one of 11 deaths that are being investigated by federal authorities, according to USA TODAY.

The U.S. Department of Veterans Affairs says it's investigating allegations of ``potential wrongdoing'' resulting in multiple patient deaths at a VA hospital in West Virginia.

VA Inspector General Michael J. Missal said in a statement Tuesday that his office has been looking with federal law enforcement into allegations at the Louis A. Johnson VA Medical Center in Clarksburg. He didn't elaborate.

An attorney for the daughter of a Clarksburg VA patient who died last year filed a notice of a pending lawsuit. It said an autopsy showed her father died after an insulin injection.

Charleston attorney Tony O'Dell said the VA told his client there was evidence as many as 10 other patients died in similar fashion.

Sen. Joe Manchin of West Virginia says he wants answers about what happened.

West Virginia politicians are calling for answers after a Vietnam veteran's death at a VA hospital was ruled a homicide.

A lawyer for McDermott's estate provided The Associated Press with a legal document sent to the VA claiming the 82-year-old was wrongly injected with a fatal dose of insulin in April 2018. It also contains an autopsy report from the Armed Forces Medical Examiner that rules the death a homicide.

Manchin also questioned the hospital's treatment of other patients.

The hospital didn't return a voicemail. A VA spokeswoman did not comment.

U.S. Senator Joe Manchin release a statement on a claim filed by Tiano O'Dell law firm that one of the up to 11 suspicious deaths being investigated at the Louis A Johnson VA Medical Center has been ruled a homicide.

“This report is shocking and if accurate, I am appalled that these crimes were not only committed but that our Veterans, who have sacrificed so much for our country, were the victims. As a member of the Senate Veterans Affairs Committee I will do everything in my power to investigate these accusations and get to the bottom of what happened. These families and loved ones deserve answers as soon as possible and I will make sure they get them,” Senator Manchin said.

The claim states that the other nine or ten suspicious deaths are also expected to be a homicide.

A lawsuit filed by the Tiano O’Dell law firm claims that retired Army Sgt. Felix McDermott received a fatal dose of insulin while a patient at the Louis A. Johnson VA Medical Center.

The claim stated that employees never told McDermott’s family how he died. He was buried four days later.

On Oct. 23, 2018, McDermott's remains were exhumed and sent to the Dover Air Force Base for an autopsy and investigation.

The autopsy completed in February confirmed that McDermott was not a diabetic and that he was showing improvement in his medical condition when was injected with insulin.

McDermott’s death was ruled a homicide.

The lawsuit also claims that nine or 10 other patients died of severe low blood sugar before McDermott’s death.

“It’s all very disturbing that people who served our country were being killed either extremely negligently, grossly negligently or intentionally, and nobody has done anything about it,” said Tony O’Dell, the family’s lawyer.

The VA medical center breached its duty and was negligent in several ways, the lawsuit said, and thus, their client, the estate of McDermott, is seeking damages of up to $5 million for wrongful death, $1 million for personal injuries and expenses for the funeral and other costs.

"Each time one of these deaths happened, they have an obligation to run at the ground to find out what happened, why it happened, how it could be prevented," O'Dell said.

McDermott was a Vietnam veteran who served for 20 years before retiring.

“This news is sickening and troubling," Capito said. "My office has reached out to the VA to learn more details, and I will do everything I can to make sure this is fully investigated.”

Sen. Joe Manchin release a statement on the lawsuit, saying: “This report is shocking and if accurate, I am appalled that these crimes were not only committed but that our Veterans, who have sacrificed so much for our country, were the victims. As a member of the Senate Veterans Affairs Committee I will do everything in my power to investigate these accusations and get to the bottom of what happened. These families and loved ones deserve answers as soon as possible and I will make sure they get them."

Ohio University layoffs could mean a difficult future for workers

Ohio University layoffs could mean a difficult future for workers