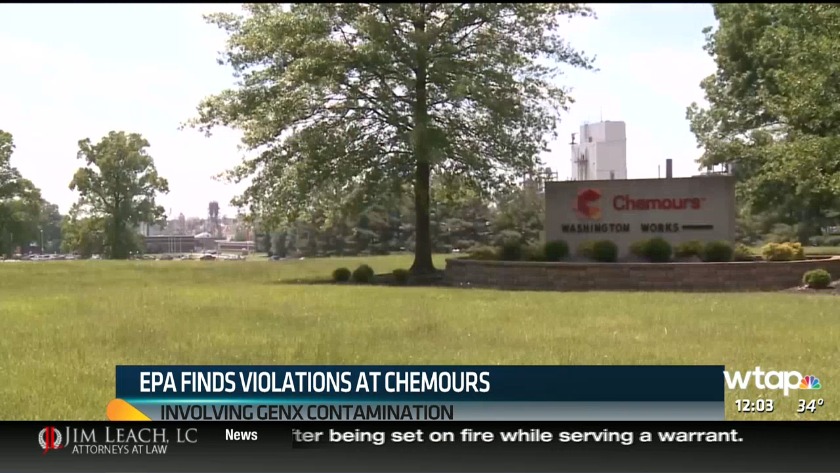 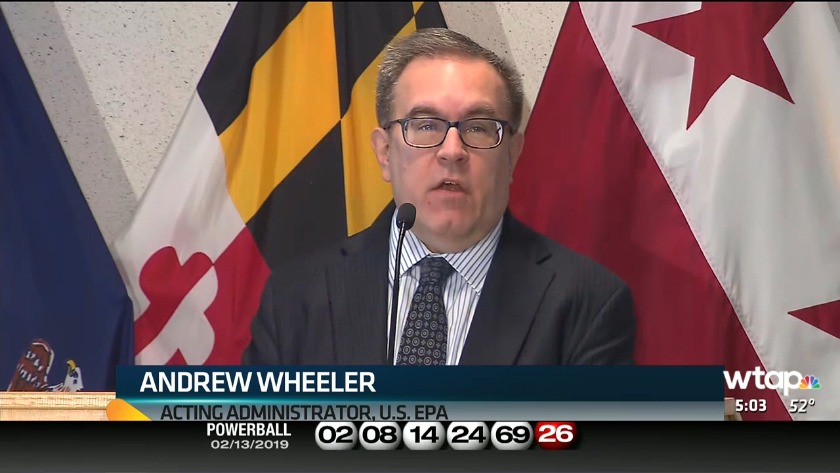 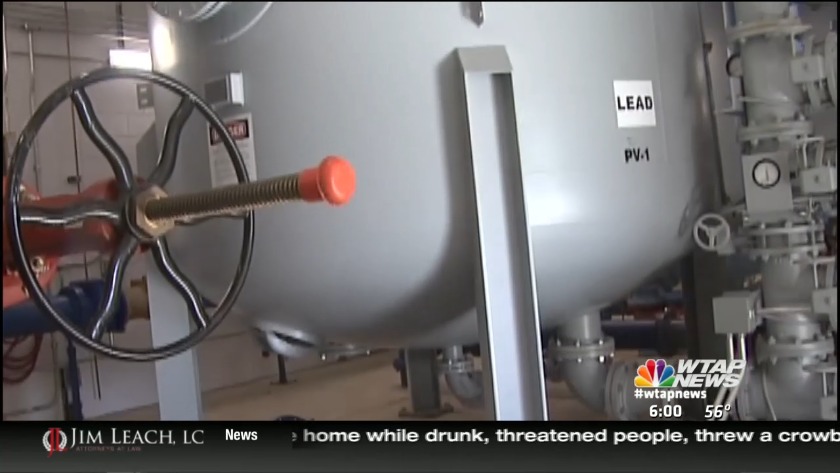 The U.S. Environmental Protection Agency says a chemical maker's North Carolina plant may have broken federal law by failing to notify the agency before it started manufacturing and repurposing new industrial compounds.

The EPA said in a violation notice letter this week that The Chemours Co. also failed to provide information showing when the company learned the chemical GenX contaminated water wells and properties around its factories near Fayetteville and Parkersburg, West Virginia. The agency says the violations were found after the two plants were inspected in 2017.

Chemours spokeswoman Lisa Randall says the company has since made changes to address some of the issues. She wouldn't say why Chemours didn't provide EPA with the required notices.

The EPA says its Chemours investigation may find other violations. Fines could follow.

GenX, the replacement for C8, once used by a local manufacturer, is back in the news again.

The U.S. Environmental Protection Agency is seeking public comment on the effects of the replacement chemical.

The EPA has issued a draft report on the hazards of GenX and a related chemical PFBS.

Like C8, GenX is used in the manufacture of non-stick surfaces such as Teflon. DuPont Washington Works-now Chemours-used it in production until a few years ago.

The EPA's draft report suggests GenX may be less toxic than C8, but adds that assessment may change with public comment.

It adds animal studies have shown health effects in kidneys, liver, blook and the immune system-effects it adds are "suggestive of cancer".

An independent scientist, however, remains skeptical of the EPA's findings so far.

"I've spoken to other scientists who have concerns about how the values are calculated for GenX, because of the absence of human biomonitoring data, indicating how long GenX actually stays in the body," says David Andrews of the Environmental Working Group. "It might actually be slightly more of a concern."

The agency says its study will not only focus on toxicity, but also public exposure to GenX and similar chemicals.

The studied chemical compound has not been found in treated drinking water that came from contaminated wells in Ohio and West Virginia. However, the unregulated compound was found in untreated water in nine wells near Chemours' Washington Works facility.
The EPA requested Chemours to test the water at ten private wells in Ohio and West Virginia, as well as four public systems, over concerns of GenX contamination.

"There is evidence that it's in the well field, so we want to ask for continual testing because one set of tests doesn't establish or prove anything," Little Hocking Water Association attorney David Haltman added.

GenX is used to make products like nonstick cookware, and has been linked to several forms of cancer in animal studies.

GenX was found in a North Carolina river last year, where it contaminated area drinking water.

We reached out to Chemours and the EPA for comment but they did not get back to us.

You can see the EPA's full report at epa.gov/pfas/chemours-company-well-sampling-results

A Washington County water district says the chemical that replaced C8 has been found in testing of its water supplies.

But the results of other water systems vary.

Monday, the Little Hocking Water Association notified its customers of testing the U.S. EPA requested of water systems that installed filtration systems to remove C8 from their water.

This time, the testing involved GenX, the substance Chemours now uses to make non-stick products such as Teflon.

Little Hocking says GenX was detected in water that had not yet been treated in its activated carbon system.

Association Manager Jon Hanning went on to say in a news release the testing did not detect the chemical after it was treated.

But he added there are still scientific concerns about the effectiveness of carbon treatment at removing GenX.

Nearby, the city of Belpre installed carbon treatment systems-originally, to remove C8-at about the same time Little Hocking's system was being built.

Belpre Public Works Manager Michael Betz shared with us testing done in February by a firm hired by Chemours.

It showed levels mostly below the maximum safe limit for GenX and C8 in drinking water supplies.

Vienna Mayor Randy Rapp indicated the same, although he added he was informed of that verbally, and had not yet seen actual data.

"Chemours will sample the Chemours Washington Works raw and finished water in February 2018, when the routine monthly monitoring for perfluorooctanoic acid (PFOA) is conducted," the company says in its letter. "Chemours will mail letters to each of the remaining three public drinking water suppliers and the ten private drinking water supplies and present EPA’s request for the GenX sampling."

Chemours also asked the EPA for permission to do the sampling itself and said the company would conduct the GenX sampling "with its regularly scheduled biweekly, monthly, or quarterly sampling for PFOA, as appropriate."

Chemours says in the letter it will complete the GenX sampling during February. The EPA asked that the testing be done no later than March 31.

In its letter to Chemours dated Jan. 11, the EPA says carbon filters are in use at all of the water supplies in question.

GenX is manufactured at a Chemours plant in Fayetteville, N.C.

Chemours is currently providing bottled water to residential well owners in that area who water samples showed GenX levels above 140 parts per trillion.

The City of Vienna is the most recent water system to install equipment to filter out C8. That chemical was found to be in high concentrations in Vienna's water system, after the EPA changed its guidelines for the safe concentration of the chemical used by Chemours' predecessor, DuPont Washington Works, until 2015.

Mayor Randy Rapp said Wednesday he was told by Chemours that the filters, installed in 2016, could filter out GenX as well as C8.

The family of chemicals for whose effects attorneys are seeking studies includes the chosen substance to replace C8.

As we reported in August, those same attorneys are seeking answers about the use of GenX.

They include data on its release into the Ohio River, and what possible effects it has on human health.

Lubeck resident Joe Kiger, who was part of the original lawsuit regarding C8, is concerned about GenX's effects as well.

"That's what they call daimner acid salts-3, which falls into the PFOA category," Kiger says. "They've said 'all of this stuff isn't going to hurt you'. We've heard all that before. Yet, it carries all the family model and characteristics as PFOA, C8."

DuPont Washington Works, now part of Chemours, stopped production and use of C8 a few years ago.

That was after it sought permission from the West Virginia Department of Environmental Protection for the use of GenX.

Attorney Robert Bilott has now asked for a study on all perfllorinated chemicals or PFAS substances.

He pledges to file lawsuits if those studies have not begun.

Earlier this year, almost two decades of lawsuits and trials ended with a settlement, over the effects of the chemical C8.

But, just six months later, some are asking questions about the chemical that took its place.

Robert Bilott is a Cincinnati-based attorney who has represented people in various legal cases against DuPont, over its use of C8.

Bilott, according to a letter obtained by The News Center, has requested information from the West Virginia Division of Environmental Protection about the chemical that's replaced it, publicly called GenX.

Bilott's firm has questioned whether a consent order allowing the discharge of GenX into the Ohio River was granted before the effects of that chemical were fully determined.

It also asks whether DuPont, whose Washington Works plant is now owned by Chemours, began using GenX even before the DEP granted that consent order.

Bilott, in its request to the DEP, cites documents it received through public information requests as saying DuPont began using and discharging GenX by late 2011.

It further cites those documents as saying the consent order allowing that use and discharge was not formally signed until early 2012.

Bilott adds information it has obtained indicates DuPont later notified the DEP that some of the effects of GenX were similar to those found in its predecessor, C8.

Bilott has called on the DEP to ensure area drinking water is protected from any contamination from GenX.

We have reached out to the DEP and Chemours, via e-mail, for comment on Bilott's own questions.

When they respond to those requests, we'll let you know.