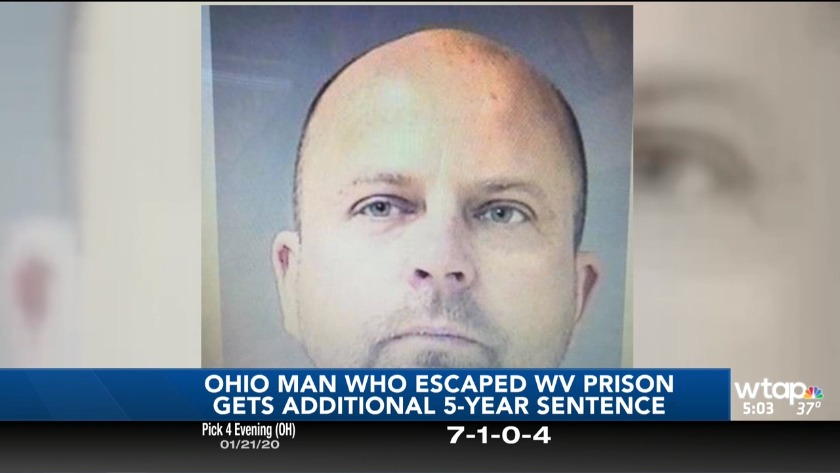 An Ohio man who escaped a West Virginia jail and was later caught trying to flee into Mexico has been sentenced to an additional five years in jail.

Boyes escaped two days before his scheduled sentencing on charges including fleeing and possession of a stolen car.

The new sentence will begin after he completes a five- to 20-year sentence on the original charges.

Boyes walked out of the jail in street clothes and was apprehended in Mexico at the U.S. border with Texas.

A man who escaped a West Virginia jail in October has finally been sentenced on charges from a police chase in February.

Todd Boyes is looking at spending the next few years behind bars.

Boyes pleaded guilty in September to having a stolen vehicle, running from police and causing bodily injury.

On Tuesday, the judge sentenced Boyes on all three charges, which came after a February, 2017 incident, when officers say Boyes took police on a 45 minute pursuit then rammed into a cruiser and sent an officer to the hospital.

The stolen vehicle and fleeing charges each carry a 1-5 year sentence. The bodily injury charge is 3-10 years. He'll serve those consecutively.

At maximum, Boyes could serve the next 20 years in jail.

Before that pursuit in February, Boyes was already wanted for several carjackings in Ohio.

He was set to be sentenced on the pursuit charges in October, but he walked out of the West Virginia South Central Regional Jail on October 25, just days before his sentencing, and was later captured in Texas as he tried to cross the Rio Grande River into Mexico.

Boyes still faces an escape charge in that case, which is headed to a grand jury.

Todd Boyes was booked back into the South Central Regional Jail at 6:15 p.m. on Sunday.

Kanawha County Prosecutor Chuck Miller told WSAZ just days ago that Boyes was expected to be coming back soon from Laredo, Texas. Boyes denied his identity at an extradition hearing in November, thereby requiring a governor’s warrant and a DNA test to bring him back.

Boyes walked out of the South Central Regional Jail on Oct. 25, but it was not reported until two days later. Three jail employees are being charged as a result.

In October, an inmate who escaped the West Virginia South Central Regional Jail was caught in Texas trying to cross the Rio Grande River into Mexico.

Now investigators say three correctional officers at the jail have turned themselves in to West Virginia State Police.

The officers will be charged with permitting escape, a misdemeanor charge.

Investigators say the guards were negligent in Todd Boyes' escape in October, when he walked out of the front door of the jail dressed in plain clothes and was not reported missing for more than 36 hours.

Five guards were suspended without pay at the start of the investigation.

There is no word if the other two guards will also face charges.

A fifth correctional officer has been suspended without pay after an inmate escaped from the West Virginia South Central Regional Jail and was captured in Texas while trying to enter Mexico.

Todd Boyes escaped just after 5 a.m. Oct. 25, but it wasn't until more than 30 hours later he was reported missing.

After an extensive manhunt, troopers say Boyes was captured early Sunday morning in Laredo, Texas, as he was trying to cross into Mexico.

The West Virginia Regional Jail and Correctional Facility Authority launched an internal investigation last week to figure out how Boyes was able to escape.

Shortly after that, four guards were suspended without pay.

According to a news release, the medical services provider for the regional jail system, PrimeCare, has informed RJA that it has fired an employee assigned to SCRJ as part of its own review prompted by the escape.

Meanwhile, Boyes appeared in a Texas courtroom on Thursday for his extradition hearing.

During the hearing, Boyes denied his identity.

Officers now must get a Governor's Warrant and do a DNA test on Boyes before he can be extradited back to West Virginia to answer charges.

Boyes was in jail on an attempted murder of an officer charge.

Last February, police say he was involved in a police pursuit and rammed into a cruiser.

For the first time since the escape of inmate Todd Boyes, 44 of Caldwell, Ohio, a spokesperson for the West Virginia Regional Jail Authority spoke in a TV interview.

saying, "What we characterize as a glaring and unacceptable lapse," Lawrence Messina said.

Messina says there are still more questions than answers about Boyes’ escape.

"So we're talking about someone who went from his cell, out of his section, out of his pod, to the administrative area of the jail and then out the door... and yes, there would have been locked doors between his cell and that exit," Messina said.

It was 37 hours and five headcounts later that Boyes was reported missing.

"In times like this, there may be a temptation to shove the buck of blame," Messina said.

That's when they started working behind the scenes reviewing records, interviewing inmates and staff and looking at security footage.

"They couldn't necessarily rule out the possibility that he may still be on the grounds for instance, hiding somewhere or we didn't know," Messina said.

When they realized he left the facility five hours later, they notified police.

"I don't know that we can assign blame until the investigation is complete, and it gives us a sufficiently clear picture as to what happened here," Messina said.

West Virginia authorities say an inmate who escaped from a jail two days before his sentencing has been captured along the Mexico border in Texas.

Boyes was taken to the Webb County Jail in Texas.

Boyes had changed into civilian clothes and escaped the South Central Regional Jail in Charleston on Wednesday, but the jail staff didn't notice until Thursday evening.

Boyes was scheduled to be sentenced Friday on charges including fleeing and possession of a stolen car.

Todd Wayne Boyes, 44, of Caldwell, Ohio, is considered armed and dangerous and police are out actively searching for him.

South Central Regional Jail officials say Boyes was discovered missing during a formal head count at 7 P.M. on Thursday, and began an investigation into his escape, but Boyes wasn't reported missing to West Virginia State Police until 12:40 A.M. Friday.

Investigators say the inmate somehow obtained khaki pants, a dark colored shirt and white shoes, changed into those clothes in his cell, then walked out of the South Central Regional Jail

He changed into these clothes in his cell and managed to walk out of the South Central Regional Jail, according to state police.

Three formal, end-of-shift head counts failed to alert jail staff to Boyes’ disappearance, as did two informal, overnight counts. The ongoing investigation is focused on whether the procedure for these counts was followed properly.

The procedure involves the lockdown of inmates and the matching of inmates to booking and Offender Information System records, among other measures.

The formal head count conducted at 7 p.m. on Thursday, Oct. 26 revealed that Boyes was missing.

During the resulting investigation, a review of the facility's security video yielded footage of Boyes leaving the facility the previous morning.

Given Boyes’ criminal record, he is to be considered armed and dangerous.

Police say there is no indication that Boyes obtained any sort of weapon from the facility during his escape, but if anyone sees Boyles, he is not to be approached but instead law enforcement is to be contacted.

Police have been out looking for Boyes since he was reported missing from the jail.

Boyes pleaded guilty Sept. 27 to having a stolen vehicle, running from police and causing bodily injury.

The charges are from a February, 2017 police chase that lasted 45 minutes, during which Boyes crashed into a police car, sending one officer to the hospital.

Boyes was scheduled to be sentenced on the charges Friday morning.

He was already wanted for several carjackings in Ohio.

Boyes is 5'6, 220 lbs., bald and clean shaven, and was last seen wearing a white t-shirt, dark colored pull over shirt, and tan pants.

Police say if you see Boyes, do not approach him, but call 911 immediately.

Keep checking the TNC Now mobile app, and TheNewsCenter.tv, for the latest updates on this story.

2 arrested after police pursuit ends in crash in Boaz

2 arrested after police pursuit ends in crash in Boaz