This Is Home: The Castle and Henderson Hall at Christmas 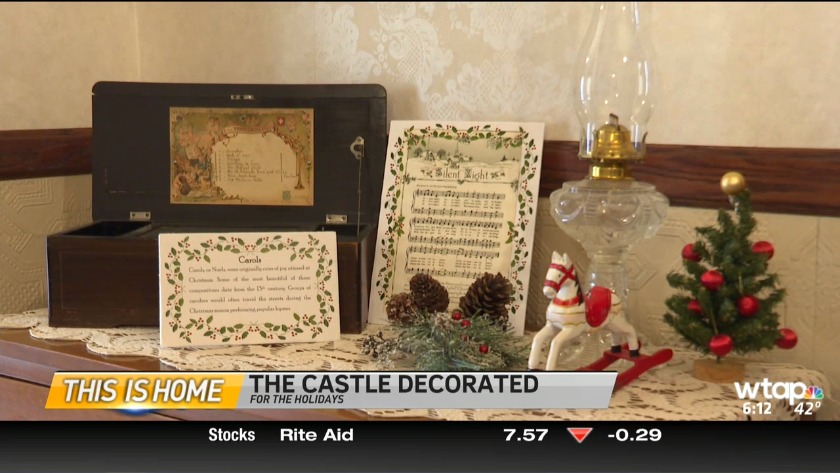 WTAP 6 - This is Home: The Castle in Marietta

The Castle has been a museum since 1994, and nearly every year since then, it has been decorated throughout the holiday season.

And while it wasn't the home of a single family, it had a rich history of holiday traditions.

Stepping into the Castle in Marietta is always a walk into history. And for all of its 25 year, the museum, located on Fourth Street, has been a showcase for the holiday traditions of the past.

"You get a sense of the decorations, the styles and some of the traditions and legends during the holiday season," says Scott Britton, Executive Director.

They include a Christmas tree in the parlor-one you can see from outside the front window-and trees in several rooms on each floor.

The one-time mansion represents how its occupants, and even the hired help, decorated for the holidays for several generations.

"They certainly would have had the means and the finances to do all of those things," Britton says of the home's many occupants. "And some of the people who worked here, some of the servants who have an immigrant background, they would have probably brought some of those traditions to the Castle as well."

The decorations have changed from the past only with respect for safety-no real trees decorated with real candles, for instance.

While the Castle has been a tourist attraction for a quarter of a century, Britton believes attention from a recently-published book could bring even more visitors to both the area and the Castle.

"Because of all of the interest in the David McCollough book and the Pioneer history and the increased tourism here, we're hoping to get people not only from this region, but much wider regions around the United States."

The Castle and Henderson Hall, located across the river in Wood County, have one thing in common: they were designed by the same architect.

There's more on the Castle on the "Hot Button".

In the past decade, Henderson Hall has increasingly been restored to reflect the dream of the later generations of the Henderson family: to show what the mansion-type home looked like in the 19th and early 20th centuries.

And during the holiday season, it is decorated to reflect how the Henderson family celebrated the holidays throughout the years.

Five generations of Hendersons lived in the home just off route 14 between Williamstown and Boaz. And even for those who lived out of town, celebrating Christmas with the family was a priority.

"Even with snow, they would come here with snow on the ground, and travel here in buggies or wagons, or later, the old cars," says
Henderson Hall Director Randy Modesitt. "They made a special effort to get here and show that time together."

It was a tradition interrupted only by tragedy.

"George Washington and Elizabeth's oldest son passed away immediately after Christmas in 1863," says Debbie Fenton, volunteer and docent. "When he died, they didn't have Christmas in the house for a while. Then, the next generation did."

But it was a lot simpler than how we celebrate today. The presents they gave each other weren't from a store, a catalog, and certainly not from an online retailer.

In fact, a lot of them were homemade.
.
"They would exchange books; they gave each other a book, Modesitt says. "Rosalie Henderson was very well-known for making a dress or an apron for her mother, and something for her father and her brothers and her sisters."

Henderson Hall is decorated with nine trees and Christmas traditions from various eras. It's open Tuesday through Sunday afternoons for tours during the holiday season.

It also plans an open house for the public Saturday night, December 7, from 6-9 P.M. At that time, some rooms normally cordoned off will be open to visitors.

Artsbridge bridges the community to the arts

This is Home: Babies born on New Year's Day in the Mid-Ohio Valley

This Is Home: Meal helpers for the holidays

Artsbridge bridges the community to the arts

This is Home: Babies born on New Year's Day in the Mid-Ohio Valley

This Is Home: Meal helpers for the holidays